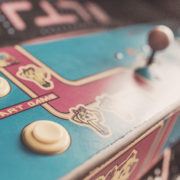 There are no upcoming events at this time.
Age 3.0: The Creative Aging Fair is coming to Concordia on August 25