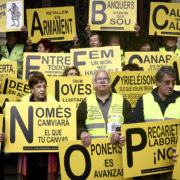 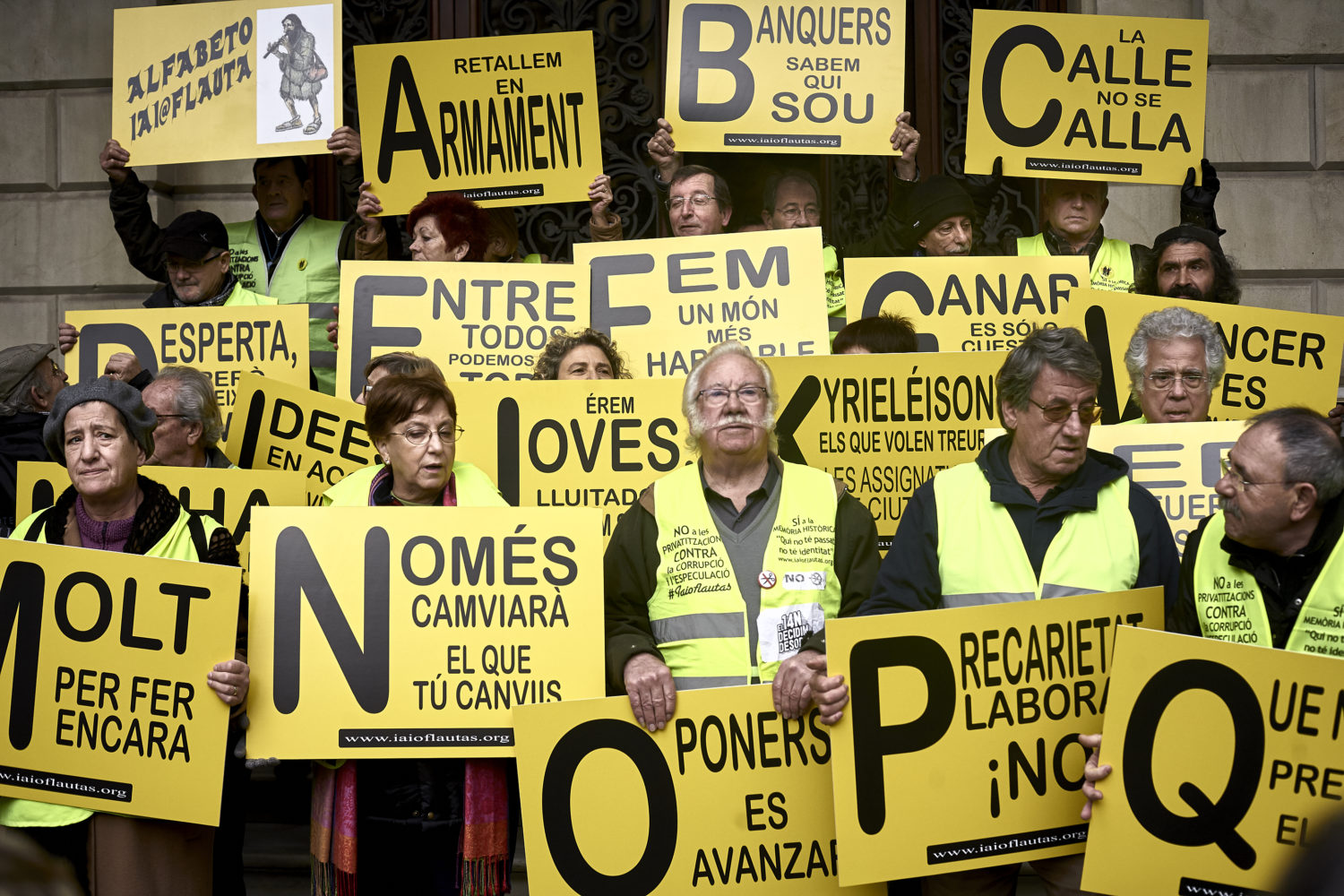 The Iaioflautas in a demonstration on January 2013 (photo by Fotomovimiento under a CC BY-NC-ND license).

With this text I intend to share some reflections regarding the perception of stereotypes of older people, and how these are confronted by older adults who are highly active in political protests, in adopting information and communication technologies (ICT), and in continuous  collaboration with younger generations. These reflections come from a broader case study about a social movement led by older people that emerged in Barcelona in late 2011 called “Iaioflautas,” which in English can be roughly translated as “flute grannies,” in solidarity with the defamatory appellation against young hippie squatters, “Perroflautas” (“flute dogs”).

It has become common to think about older people as engaged voters and thus more politically involved than younger people. Studies have suggested that in some European countries older people seem to participate more than younger people in elections (Goerres, 2007; Quintelier, 2007). However, not many people envision older people’s political participation within social movements, in the form of protests, demonstrations, sit-ins, blockades, and other non-institutionalized ways of participating in the political sphere. Scholarship has mirrored this trend as there has been limited research conducted on older people’s involvement in political activism and protest activities (Adler, Schwartz, & Kuskowski, 2007), with some notable exceptions (Sawchuk, 2009; Narushima, 2006).

Portrayals of older adults as unskilled and as problematic ICT users are also widespread and common (Loos, Haddon & Mante-Meijer, 2012; Fernández-Ardèvol, & Ivan, 2015). Fortunately, research has challenged this perception demonstrating that age per se is not the decisive factor for ICT dexterity, but rather, it acts in conjunction with several other factors (e.g., ICT experience, socioeconomic status).

The appearance of “Iaioflautas” as a new social movement is characterized not only by being composed largely by older people, but also by their active use of ICTs for organizational and communicational purposes. Mireia Fernández-Ardèvol and I decided to examine this group in the hopes of contributing to knowledge about older adults’ participation in what has been termed “networked social movements” (Castells, 2012). The participants’ perceptions of ageist stereotypes and their use of ICTs within the movement were two of the aspects our study examined.

Through a series of 15 semi-structured interviews with politically active participants, we found that most of the interviewees shared negative stereotypes of older adults held by younger people. Some of the most common perceptions cited in the interviews were that older adults are regarded as a burden, stubborn, aloof, selfish, or unproductive. The last notion, that older adults are unproductive, was most notable, as society seems to value older adults only as long as they remain active, autonomous, productive, and engaged in society. This belief seems to be implicitly supported by some participants, who were critical of their age-peers not protesting in the streets with them. The majority also reported feeling praised and encouraged by others when engaging actively in protests. Yet, even when they do so, they are scrutinized and questioned. One participant remarked: “When you go out, ‘disguise’ yourself, and do what we do…you’re a freak! They don’t understand. ‘What is that person thinking?’ ‘But Sir, at your age?’” So, on the one hand, older people are valued only if they participate actively in society, and on the other, are judged as acting inappropriately for their age.

All participants in the study have a mobile telephone and nearly all of them communicate regularly and consistently through Internet via emails, social media, and apps. The data collected from a non-representative online survey that we codesigned with colleagues (Tecnopolítica, 2014) indicates that of a subsample of self-reported participants in Iaioflautas aged 60 and over (n=13), 9 participants (69%) used a computer (desktop, laptop) and 11 (85%) used social network sites to access and share information about the protest movement. Facebook (85%) and WhatsApp (54%) were the most common digital technologies used during their participation. Moreover, 73% of these Facebook users and 71% of these WhatsApp users reported having used these technologies for the first time during their participation in the movement. In other words, their involvement in the movement also meant an introduction to new digital technologies. Our interviews revealed that participants learned to use these technologies through two distinct pathways: either forced by their daily commitments – work, family life, social participation – or facilitated by courses organized by the movement itself. The latter was particularly relevant for blue-collar workers, either working or retired. A participant explains: “We organized a couple of short courses on computing because they had no idea what Facebook or an email were. Now, they are loving it. They are with their email, Facebook, Twitter all day long, which is great! But they had no clue, 80% of them.” Although not representative of the older population in Spain, the data assisted in debunking the notion that older people are unable to learn and master new technologies as a consequence of their age.

While many participants believe that they are influencing change in regards to the prejudices and stereotypes older adults face, they do so with caution. Their participation in Iaioflautas generally inspires admiration and respect, in part, because older people are not expected to engage in protest activities, and also because this group is committed to intergenerational activities (Villar, 2012). They have been engaged in constant and relatively demanding activities that work towards creating solidarity across generations. Although most often regarded as an older adult’s movement, people of all ages participate in the group, either sporadically, or on a regular basis: younger people help older adult’s learn ICTs; younger people learn from the older adult’s organizational and tactical ideas; and Iaioflautas usually supports other associations and social movements that champion intergenerational interests. Many participants expressed a wish for greater media coverage so their work can be both locally and internationally recognized, and to demonstrate to the world that older adults can be politically active. Others expressed a wish for more equitable treatment in the media. One participant expresses this concern: “A few months ago there was a newspaper article that said ‘Iaioflautas with iPhones’…So what? That because we are older we can’t know how to use telephones and new techniques? It said something like we were Superman, or the like, because we even had iPhones!”

While this study addresses what might be understood as a minority within a population, it is important to remember that only a relative minority of people, young or old, becomes involved in social movements activities. Our findings challenged the social perception of older adults as problematic in the adoption of new ICTs. We found that as long as older adults understood the adoption of new technologies as beneficial, their interest in learning increases, and they can become as intensive users as younger people. Iaioflautas offer us a good example of how ageist stereotypes can be combated: via greater intergenerational interaction and collaboration, wider training opportunities on ICTs, and fairer portrayals of older people in the media and popular culture. This might not be enough, but it helps in building greater social cohesion between older and younger people, a relationship that at times appears to be under stress.

Daniel Blanche is a PhD student at University Pompeu Fabra in Barcelona and a Research Assistant for ACT, involved in coordinating the Telecommunication Technology research stream of the project.

There are no upcoming events at this time.
Loredana Ivan on “Seniors, risk and mobile communication” at IN...

Ageing (Wo)Men and their World
Scroll to top