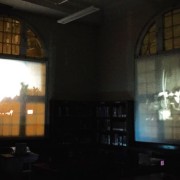 We know libraries are packed full of fascinating stories but these stories are usually found in books that sit silently on shelves. This weekend will be a little different because the walls and windows of the Atwater Library are about to come alive with video footage from local Montreal residents.

In preparation for Nuit Blanche (part of Montréal en lumière festival), the Atwater Library’s Digital Literacy Project has worked together with older Montreal residents to digitize Super 8, 16 mm, and 8 mm home movie reels. Not only have the older adults involved contributed to the digitization and editing process of their home movies, they’ve created soundtracks to accompany the projections.

From 5:00 pm – 1:00 am on Saturday, February 27th, viewers will be immersed in movies from the 1940s through to the 1970s as the stories and sounds of Montreal residents dance on the walls and windows of the Atwater Library’s 188-year-old heritage building.

Join us at Moving Pictures: Moving Histories Out of the Attic and Into the Public as we share stories from times and technologies of the past at the Atwater Library (1200 Atwater Avenue; metro: Atwater).

The Atwater Library is a partner of Concordia’s ACT (Ageing + Communication + Technologies) Project and this project is specifically connected to the Older Adults Music Making Club. The project has gained additional support from New Horizons for Seniors.

If you’re interested in checking out a similar, older project, have a look at Memoryspace. This was a project that we worked on with the Atwater Library in 2012.