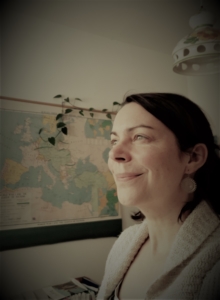 Karine Bellerive is a doctoral student in the Department of Communication at Université de Montréal, under the supervision of Line Grenier. She’s particularly interested in self-writing practices and their value as modes of knowledge production, as well as issues related to memory and aging. Her thesis project is entitled, Exploration de la force performative des écritures de soi-s par une recherche-création féministe : vieillissements et devenirs (roughly translating as Exploration of the performative strength of self-writing through a feminist research creation project: aging and becoming). She explores writing through writing, and questions what can emerge from self-writing processes.

Among other things, she co-authored a text on the contribution of feminist studies to media communication research, which appeared in the pedagogical work Critical Perspectives in Communication. Context, Theories and Empirical Research (2016), and published the chapter “Discussions on gender: Generation X female readers interpret autofiction in a feminine way” within the collective Femmes désirantes. Art, Literature, Representations (2013).

Karine is the recipient of the Ageing, Communication and Technology (ACT) Doctoral Bursary (2018) and of the Social Sciences and Humanities Research Council (CRSH) Joseph-Armand Bombardier Canada Graduate (Doctoral) Scholarship (2017-2020).

She’s also a lecturer in the Department of Letters and Communications at Université de Sherbrooke, where she has been teaching theories of communication and writing since 2008, and where she has been involved in various educational committees. She’s finally a member of the Culture populaire, Connaissance et Critique (CPCC) lab, at Université de Montréal, and a member of the Centre de recherche et d’expertise en gérontologie sociale (CREGÉS).