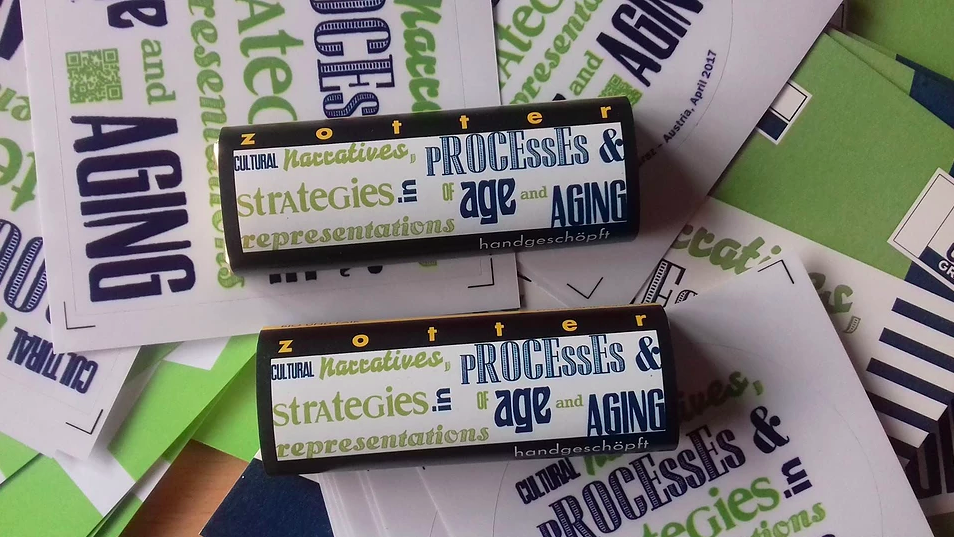 Photo by the University of Graz

From April 27 to 30, 2017, the conference AgingGraz2017: Cultural Narratives, Processes & Strategies in Representations of Age and Aging took place at the the Medical University of Graz in Austria. AgingGraz2017 was the third conference of the European Network in Ageing Studies (ENAS), and also the first conference to be jointly organized by ENAS and its counterpart the North American Network in Aging Studies (NANAS). ENAS and NANAS are partners in the ACT project; our memberships overlap, we are co-conspirators in summer schools and research projects, and our intellectual concerns converge in several ways. For these reasons, it made sense that the ACT project be a co-sponsor of the conference.

AgingGraz2017 proved to be a remarkable opportunity for ACT to continue to foster relationships and collaborations between researchers and among institutions, and to build new connections within ageing studies. With more than 250 scholars from over 125 universities in attendance, it was also an occasion for ACT members to showcase their recent work to colleagues and new audiences. This was especially the case for the many ACT researchers who had never attended an ENAS or NANAS conference before travelling to Austria for AgingGraz2017.

Shannon Hebblethwaite, ACT co-applicant and Associate Professor of Applied Human Sciences at Concordia University, was one of these first-time participants. She explained that she “was impressed by the depth of critical reflection and the thoughtful and constructive discussion that occurred in each and every session”. Hebblethwaite, as a founding member of ACT’s Ageing and Place working group, helped organize two of the three ACT panels of the conference. One dealt with “Expanding our Understanding of Ageing in Place” and the other with “Ageing in Unexpected and Everyday Places,” and panelists presented research they had undertaken as part of the working group over the previous year. The third ACT panel was organized by Stephen Katz, who is an ACT co-applicant and Professor of Sociology at Trent University. He brought together ACT researchers from three countries to form a panel titled, “On and On (and On): Music, Memory, and the Performance of Age”. Like Hebblethwaite, Katz also built upon the work of an ACT working group, this time the one on Music and Ageing.

“Panelists and their audiences were invited to work to uncover theoretical and methodological linkages, and to make connections between presentations”

Beyond these ACT-organized panels, AgingGraz2017 was a large conference, with three keynotes addresses. David Ekerdt spoke on aging in a world of things, Jane Gallop on the phallus and its temporalities and Margaret Morganroth Gullette, as the ACT-sponsored keynote, presented an impassioned talk titled “Ageism: The Attacks, the Hurt, The Opposition”. There were concurrent panel sessions throughout the four days, which often opened up into lively discussions and incisive back and forth exchanges between attendees and presenters. The panels constituted by the conference organizers were varied, bringing together scholars from social sciences and humanities, and from a wide spectrum of intellectual backgrounds and disciplines, from sociology, gerontology, communication studies, political science, literature, and fine arts, among many others. One of the local conference organizers and also an ACT collaborator, Roberta Maierhofer, expressed to the audience that the diversity within the panel composition was deliberate. It was indeed the result of careful design by the organizing team. Individual presentations were not always paired with what could be construed as their most expected or obvious counterparts. Instead, panelists and their audiences were invited to work to uncover theoretical and methodological linkages, and to make connections between presentations that might have seemed disparate at first glance. 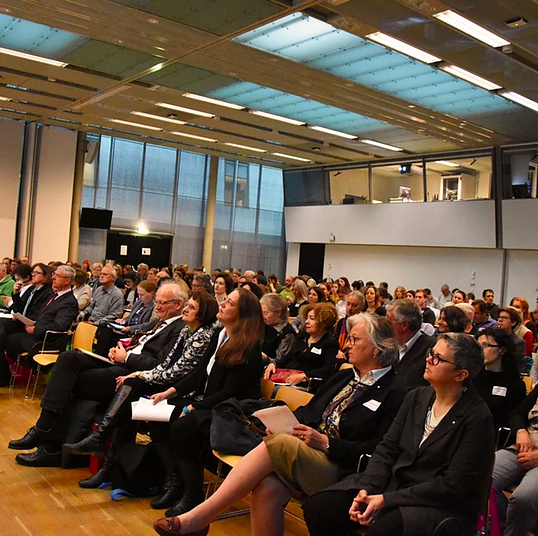 Conference participants gather for opening remarks on April 27, 2017.
Photo by the University of Graz

In all, some twenty-five ACT-affiliated researchers from seven countries participated in the conference, as presenters or as attendees. This included several graduate students and emerging scholars, many of whom received ACT funds to attend the conference and to present their recent PhD or MA research on ageing, communication and technologies. Sigal Naim, an alumni of the ACT project and a recent recipient of a doctorate from Ben Gurion University in Israel, explained: “as a gerontologist who studies the online arena in old age, this conference had the exact mix I needed in order to learn about the innovative studies in both fields”. She further indicated that attending AgingGraz2017 afforded her with an opportunity to show her research to many of those who had supported her throughout her PhD, and to connect with colleagues she had not yet met in person.

The conference schedule also furnished time for probing artistic interventions. Alex Rotas presented a collection of photographs of older athletes titled Documenting the Active Aging Body: From Elite Athletes to the Less Mobile. Marlene Goldman, on the other hand, screened excerpts from her upcoming short film Piano Lessons. Goldman is a Professor of English at the University of Toronto and a collaborator in the ACT project, and Piano Lessons was funded in part by ACT. Adapted from a short story by Canadian author Alice Munro, the film offers a thought provoking take on dementia and ageing through the storied lense an older woman searching for the site of an appointment she’s made. The film, which was enthusiastically received by the audience in Graz, will be widely viewable online in 2018 (but for now you can see the trailer here).

Conferences are at their best when they invigorate intellectually, challenge preconceptions, and create the spaces for participants to engage, and laugh and think together. And by these measures, AgingGraz2017 was a success. On behalf of the entire ACT team, we would like to thank ENAS and NANAS for making ACT a part of this conference. We are indebted to the local organizing team, especially Oana Ursulesku, Ulla Kriebernegg, Roberta Maierhofer and Barbara Ratzenböck not only for their organizational prowess and devoted work, but also for their warmth and hospitality. We also want to thank the incredible team of local student workers who contributed greatly to making AgingGraz2017 such a memorable conference.

ACT InFocus is a monthly feature that represents some of the people, research and events of the ACT Project. You can read our past articles here, and if you have ideas or comments, you can send them here.

There are no upcoming events at this time.
Elders Make Waves for World Elder Abuse Awareness Day 2017

New Concordia University research centre on aging is looking for a coordina...
Scroll to top