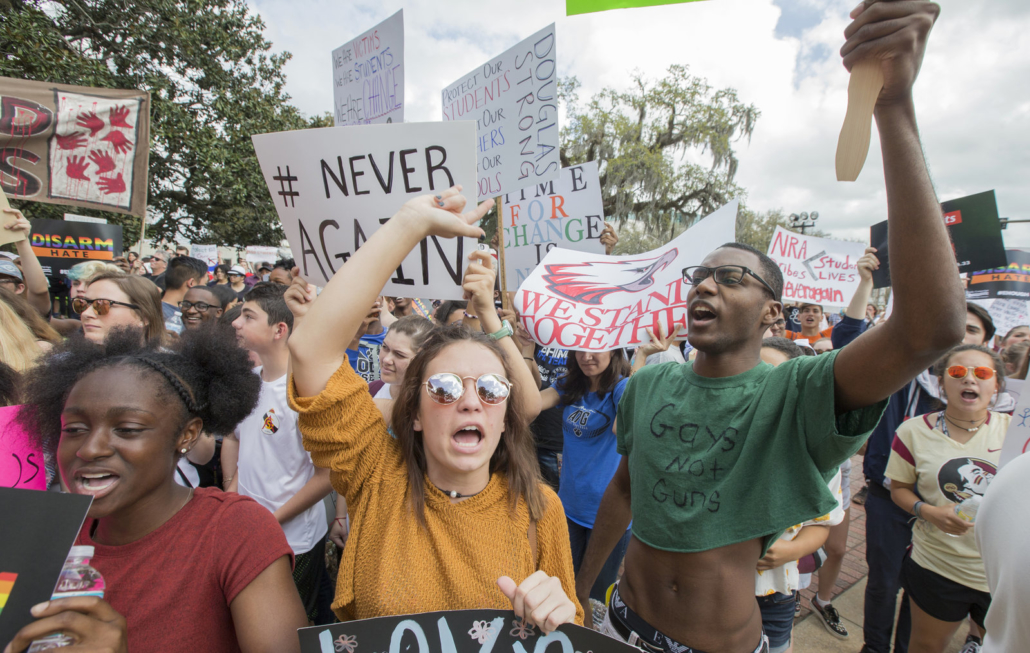 Activism is often portrayed as a youthful pursuit. Through photographs in the media and in narratives describing social movements, we regularly encounter the work of young change makers. We absorb–often without realizing it–images and stories of youth who want to make the world a better place through their revolutionary ideas and fresh perspectives. However, such portrayals of social change and activism ignore and sometimes even erase the important of work being done by older activists.

In their recently released book, Unsettling Activisms: Critical Interventions on Aging, Gender, and Social Change (Women’s Press, 2018), editors May Chazan, Melissa Baldwin, and Patricia Evans present compelling reasons why our common perceptions of activisms and activists need to be expanded; specifically, expanded to include the work of older women activists. The editors describe the two central themes of the volume as follows:

(1) the importance of understanding, recognizing, and valuing diverse activisms, particularly those most frequently omitted from the historical record; and

(2) the need for analyses that explicitly engage with dynamics of age and aging, while simultaneously considering people’s differing power, privilege, and prominence within social movements.

Chazan et al. call for a more nuanced understanding of what activisms are and who activists are. They explain, “expanding the ‘what’ is about valuing the activisms of people who do not necessarily have the mobilities or abilities required to attend large protests, or who are made disproportionately vulnerable at such protests…” (8). In fact, they expand definitions of activism by making space for “arts-based intervention, land-based practice, performance, cultural resurgence, creativity, survivance, refusal, ceremony, advocacy, and more” (8).

In their introduction, Chazan et al. “challenge the too-frequent omission of age, aging, and intergenerationality within social movement literature” and highlight a need to “insert critical analyses of activisms into aging studies, drawing on critical feminist, decolonial, race, queer, and crip theories and approaches” (6). As a whole, the collection features underrepresented voices and asks its readers to expand and nuance common understandings of aging and activism. 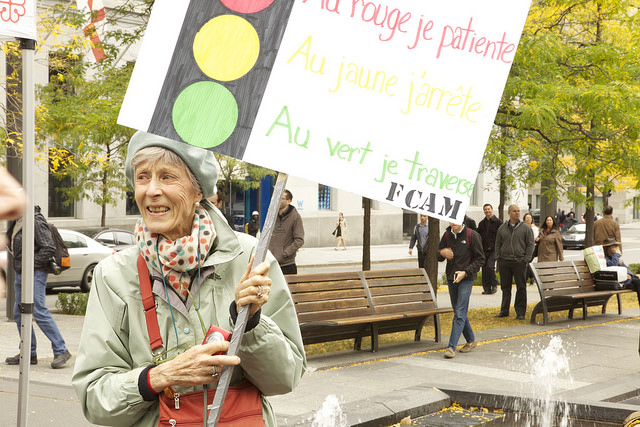 Unsettling Activisms has been compiled in a way that disrupts what readers might expect from an academic collection. While many academic volumes assemble papers in a standard format and include writing that primarily depends on disciplinary jargon, the pages of Unsettling Activisms offer a combination of essays, interviews, biographies, photographs, poems, portraits, and personal stories. The book asks its readers to think about concepts through forms that push traditional boundaries.

Alongside cogent arguments, poems and portraits give life and narratives to deeply personal reflections on activisms. These expressions urge readers to reflect upon the collection’s main themes through a plurality of perspectives. The texts and images unsettle traditional–often colonial–ways of thinking and disseminating knowledge. Additionally, and importantly, these forms make space for the voices of activists and authors who have not necessarily been trained in traditional academic modes of communication or who prefer to communicate in other ways. 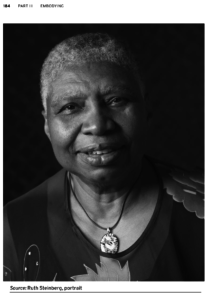 When we spoke to Chazan about her experience bringing the collection together, she explained that her team of editors made a decision to include various forms of communication – including poems and portraits – in the book after she had an important conversation with Elder Shirley Ida Williams Pheasant (see “That’s My Bridge”: Water Protector, Knowledge Holder, Language Professor in Chapter three).

Wondering how to best include the work of someone as busy as Williams, Chazan set up a time to have coffee with her. During that coffee date, Williams suggested they could record a conversation which could later be transcribed (by Chazan’s team) and included in the book as an interview (rather than an essay or an article).

Chazan explained that her team’s decision to make space in the collection for a conversation rather than an article was a very important choice that came about by simply asking Williams: “how can we do this in a way that would work for you?” After Williams made her suggestion, Chazan and her team realized that a range of forms of communication would make the collection richer. Shortly after this exchange, poetry, photos, and interviews would all become important to the collection. Flipping through the pages of Unsettling Activisms, it’s clear that these forms enrich the collection and bring rich texture to the authors’ stories. 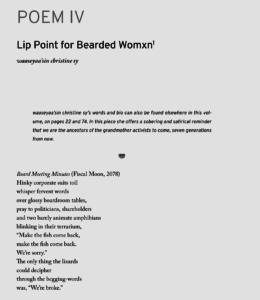 Collaboration as a way to shake up power dynamics

Chazan explained the process of bringing the book together as one of building and strengthening relationships. In this sense, the transformations that took place between the initial proposal and the final publication emerged as a result of collaboration and sharing. Additionally, these collaborations helped unsettle some of the power dynamics that can come about when you have a diverse crowd–in age, in training, and in background–working together toward a similar goal.

As it turns out, these important collaborations were essential to the success of Unsettling Activisms and, as Chazan explained, enriched the work of everyone involved. Several of the non-academic authors described to Chazan “how validating it can be to have knowledge that is valued in an academic context”. Chazan also noted how much academics learn by collaborating with people outside of academia.

Additionally, the project invited a richness of intergenerational exchange. As editors, “we were a 42 year old professor, 26 year old grad student, and 71 year old activist, all learning together and from one another.”

A different way of thinking about activisms and activists.

Chazan hopes that the book will create conversations about activism. She pointed out that “we don’t all need to be Capital A activists to do activisms. Sometimes, especially for younger activists, the concept is placed onto a pedestal. In this way, people may cast unrealistic expectations of what activist work is onto themselves or onto others.” In fact, Chazan hopes the book will “push students to think about the edges of that word [activism]” and consider that “ceremony, survival, persistence, just showing up and surviving can be forms of activism.” Because the book offers such a generous explanation, through multiple perspectives, of what activisms can be, it is likely that it will also create a space for an expanded and more inclusive definition of activism. In this case, one that is enriched through the perspectives of people who have been doing such work over a course of many decades.

We will publicize other book launches as they are scheduled.

Contextualizing Unsettling Activisms in the context of ACT

Unsettling Activisms includes writing from a range of ACT scholars and partners. Chapter two, entitled “Activist Aging: The Tactical Theatrics of RECAA”, was written by Kim Sawchuk and Constance Lafontaine of Concordia University. It describes the “activist interventions practiced by a community of culturally diverse elders, RECAA (Respecting Elders: Communities Against Abuse)” (51).

May Chazan (Trent University) and Marlene Goldman (University of Toronto), authors of Chapter 6: The Raging Grannies versus the Sexperts: Performing Humour to Resist Compulsory (Hetero) Sexuality are both ACT members.

There are no upcoming events at this time.
“Simpler Than Ever? Online Grocery Shopping With Seniors” by Nora...