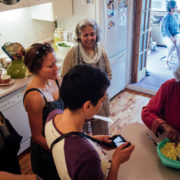 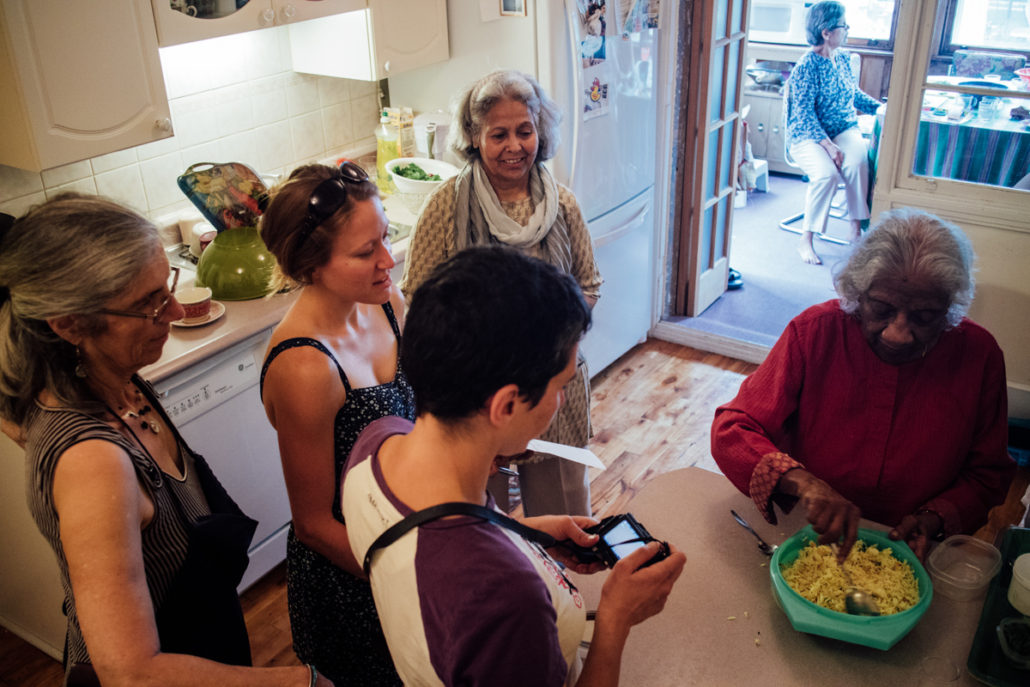 What do you get when you mix equal parts of social activism and a love of food within a group of older adults? We recently caught up with Myriam Durocher to discuss a collaborative project between ACT and RECAA (Respecting Elders, Communities Against Abuse) that uses food as a medium. Myriam Durocher, an ACT research assistant,  and Phd candidate at the Université de Montréal, has spent the last year working with RECAA to develop and help coordinate a food blog called Food Talks, À table with RECAA and friends. As an activist organization that works to raise awareness of issues that older adults face, from elder abuse to problems with accessibility, RECAA has been organizing events for a number of years, and food has been part their meetings. Myriam recounts the origins of the project: “RECAA has always had potluck style lunches every Thursday, and during this time they realized that they were speaking about themselves and the issues that concerned them. They thought about how to use food as a medium to speak about these issues, how to create a space so that they could gain visibility for themselves and their concerns. ACT was already helping them with developing digital skills, so the idea of a food blog seemed perfect.”

For nearly a year the group has been working on the food blog, sharing recipes and personal stories online. These stories offer both contextualization for their recipes and what they signify for RECAA members, as well as a means of raising awareness around the issues older adults encounter in daily life. The project received funding from a New Horizons for Seniors grant from the Canadian Government, and ACT, as a collaborator, also provided funds and support through workshops that focused on developing digital skills. RECAA members have developed and practiced photography, filming, and blog writing skills through the experience of cooking and sharing food. Myriam points out that gaining visibility in an increasingly digitalized society becomes easier for older adults when they have the skills needed to engage with the world digitally. Blog posts are not just about recipes, but include observations and thoughts on a variety of social issues. A recent entry recounts RECAA member, Marguerite’s experience working at a food bank in France. After having read an article on the CBC website, the group discussed concerns around food accessibility, in particular those of older adults. While the number of people who visit food banks is rising across age groups, ethnicities, and classes, older adults are the most vulnerable. Not only do they experience increased chances of poverty, but often lack the infrastructure to access healthy and affordable food. Whether poor public transportation systems or an absence of ramps, older adults face a host of challenges and obstacles to achieving food security.

It is here that Myriam found one of the most interesting developments: “As a group of primarily older women, they are changing their relationship with food from one that is based on caring for others, one of nourishing children and family to one that is empowering.” Their connection to food is being reconfigured from one that represents familial life to one that performs social and political activism using a digital platform.

The blog not only gives voice to the group and allows for self-representation, but it is also making a commentary on contemporary food culture. Discourses around diet and healthy eating habits position the individual as solely responsible for her or his health, thus shifting focus away from issues around food security, accessibility, and safety. They are also discourses that have permeated the notion of “successful aging” through the prescription of eating a certain way to maintain a “healthy lifestyle”. Eating becomes about caloric calculations and fat intake, rather than a more holistic understanding of the body and processes of aging. Contemporary discourses around food have, as Myriam notes, created normativities about how one should or should not eat and age: “This kind of discourse doesn’t take into account cultural backgrounds or individual bodies. It does not acknowledge singularities, but rather produces the effect ‘you should eat that’ even if it does not fit into your traditional diet or lifestyle.”

The shared lunches and food blog have also been a means for members of RECAA to engage in a cultural exchange of sorts. The group is ethnically diverse and everyone brings their own recipes, relationships, and access to different foods. Myriam relates the frustration some of the women feel when they cannot find the ingredients they want to make recipes from their home countries, as well as food often tastes different in North America from other parts of the world. She tells a story of one woman who grew up in the Caribbean and whose family raised chickens as well as grew vegetables and limes, and finds the chicken available in Montreal largely tasteless, that it doesn’t have the flavours of a chicken raised at home. The Food Talks bloggers have modified their recipes over the years to accommodate ingredient availability and different foods in their everyday cooking, and more recently how to adapt to the food blog culture. “One of the first challenges we had was that most of the women don’t use recipes when they cook. They don’t measure amounts or proceed by steps, but tend to improvise. We had to spend time to deconstruct their recipes so that we could create something accessible to blog readers.”

To record recipes RECAA members have cooking sessions facilitated by Myriam and ACT research assistants, Antonia Hernández and Magdalena Olszanowski, where they practice their photography and filming skills while recording measurements and steps of the recipe being featured that week. They also interview the person in charge of the recipe, so that when they meet next they have the material to produce a blog post. They have visuals as well as stories and thoughts about the recipe. These cooking events have begun to extend out into different communities as well. In February, in honour of Black History Month, RECAA shared a lunch with community members of Union United Church, Canada’s oldest black congregation. It was an opportunity to share experiences of living in the city, as well as learn about racism in Montreal. The lunch created a space for RECAA and the congregation to exchange and share, and become community partners.

Myriam’s Ph.D. research is engaged in thinking about the ways in which discourses on food and diet engender practices and conceptions of the body. With the emergence of a biomedicalized food culture, she examines the ways in which the contemporary body becomes a semiotic body and a medium for connecting a multiplicity of discursive, material, disciplinary, and institutional elements.

When asked what she has learned in the project, Myriam said that the group has offered her the means to develop a critical eye for the knowledge produced about food through various discourses. She says that the joy of cooking and eating the members of RECAA share is far more important than having recipes that calculate protein or fat. That the ways in which the the group relates to food is more embodied, it is about pleasure and the experience of eating together. It is about responding to a discourse that does not acknowledge the political, cultural, and social dimensions of food. It is about discovering the potential food has for activism and learning.

To learn more about Food Talks and RECAA visit their website at: http://foodtalks.recaa.ca/

If you would like to get in touch with Myriam: myriam.durocher (at)umontreal(dot)ca

There are no upcoming events at this time.
MA student Kelly Leonard wins prize for research poster