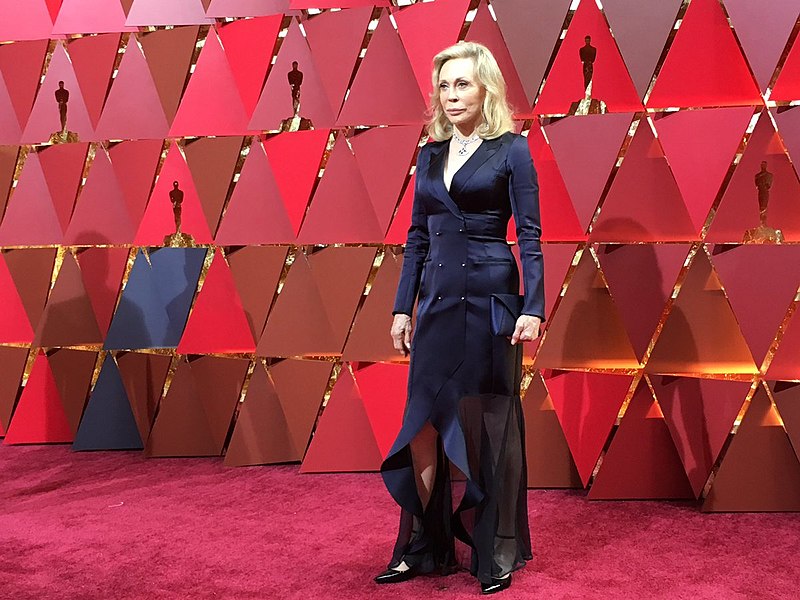 At this time of the year when the Motion Picture Academy Awards, usually known as the Oscars, help Hollywood define and celebrate the year’s best movies, acting performances and technical artistry, the glitz and glamour of the red carpet places stars at the centre of attention.

Thanks to the #MeToo movement and the Time’s Up initiative with their long-overdue challenges to the invidious and predatory sexism of an industry dominated by men on both sides of the camera, there is more than usual to applaud in this year’s celebrations.

For far too long a workforce composed of roughly 96% men has fostered a male centred workplace, and permitted a minority of sexual predators to flourish unchecked. Undoubtedly, there is much to celebrate now that these predators are being named and shamed, that abused women now feel safe to speak out, and that the careers of women in Hollywood are less likely to be compromised by unwanted and unsolicited sexual pressures. At the same time, with Hollywood’s gender pay gap foregrounded and questioned by major stars, both male and female, it seems that another strand of the film industry’s pernicious sexism is under attack.

However, any delight in this twin-pronged challenge to Hollywood’s male privilege needs to be qualified once attention shifts to aging and the new visibility of older female stars like Diane Keaton, Meryl Streep, Dame Judi Dench, Annette Benning and Dame Helen Mirren. It used to be the case that the approaching menopause marked the end of female stars’ careers except in minor, non-sexual roles, or as grotesque parodies of aging femininity, as was the fate of both Joan Crawford and Bette Davis. In marked contrast, the careers of aging male stars continued unabated and were frequently shored up by on-screen couplings with ever younger female leads.

Although hard figures vary from source to source, it is evident that women per se only occupy around 30% of all speaking roles, and this then declines even further with age

Since circa 2000, a proliferation of older female stars being nominated for, and winning, ‘best’ or ‘supporting’ actress awards at the Oscars, suggests that Hollywood is revising the value it places on aging femininity.

Unfortunately though, this revision does not translate to equal value for older male and female stars– not least because equal pay is yet to become a Hollywood norm with millions of dollars separating male stars’ higher earnings from the lower pay of female stars. And this pay gap needs to be seen in a context where older women are far less likely to be offered a speaking part in a movie. Although hard figures vary from source to source, it is evident that women per se only occupy around 30% of all speaking roles, and this then declines even further with age: from 30% to 17% for the 40+ group and as low as 3% for those in the 65+ group. Here, the acclaimed visibility of older stars like Keaton, Fonda, Streep, Dench, Benning and Mirren serves only to illuminate the surrounding deficit.

Just as significantly, the meanings attached to the appearance of older male and female stars are very different. Typically, male stars like Clint Eastwood, Harvey Keitel or Sylvester Stallone, are described as mature, veteran or vintage – terms suggesting that aging adds value, as with good cheese, fine wines and quality furniture.  The best that an older female star can expect is ‘young looking’ or ‘good for her age’. Such gendered attitudes are made evident at red-caret events like the Oscars, when male stars of all ages are clothed in the ubiquitous tuxedo that effectively styles, conceals and flatters the underlying body, while the evening gowns worn by female stars are designed to expose and reveal. If the recent British Academy of Film and Television Awards (BAFTAS’s) offer any indication, the adoption of the colour black by female stars as a gesture of solidarity with #MeToo and Time’s Up activism does little to unsettle either the prevalent exposure of female flesh facilitated by the drapes of glamorous evening wear, or the attendant scrutiny from a malicious and judgemental gossip industry.

For older female stars subject to such scrutiny, red carpet events demand adherence to expectations of ‘graceful aging’ by negotiating the twin perils of ‘frumpy’ or ‘mutton dressed as lamb’, as well as the avoidance of too much shine or too much flesh. In recent years Meryl Streep has been criticised for ‘too much fabric’ while Susan Sarandon has been vilified for ‘too much cleavage’.

A few notable stars like Diane Keaton and Dame Judi Dench have developed a distinctive ‘late style’ that conforms to red-carpet dress codes and successfully avoids the fleshy exposures of evening gowns. But with the majority of female stars conforming to the exposing codes of glamour, this carries pressures to rejuvenate through rigorous regimes of diet and exercise supported by all manner of potions, pricks, punctures and procedures designed to erase the pathologized signs of aging – greying, wrinkles, stretch marks, sun-damage, flab and scars, and especially those scars indicating plastic surgery. 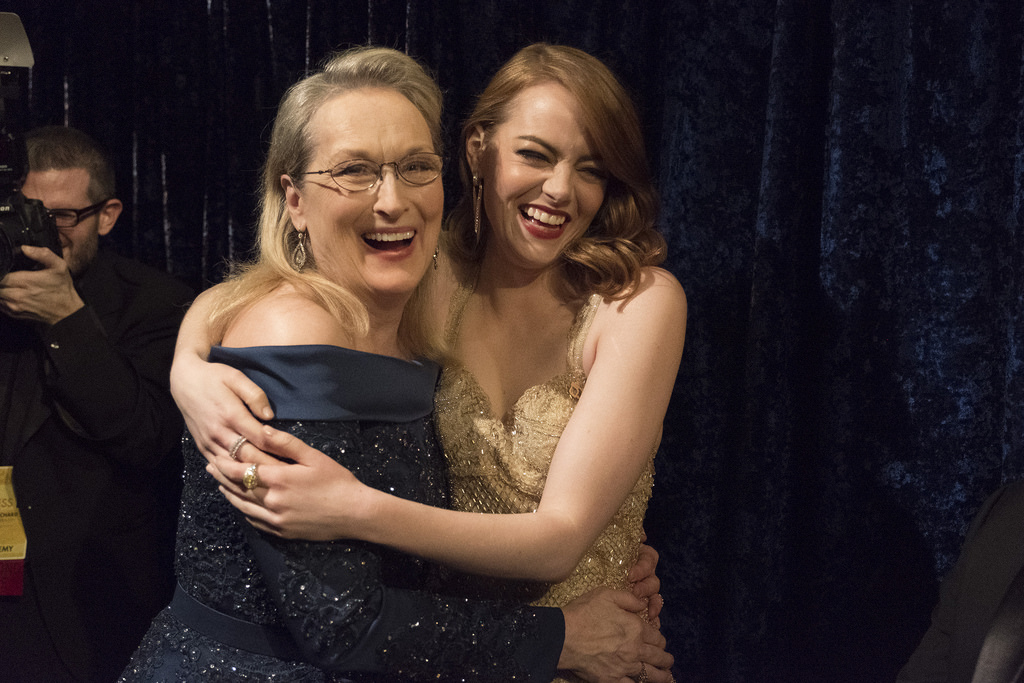 Meryl Streep and Emma Stone at the 2017 Oscars.

Famously, Meryl Streep, Diane Keaton and Dame Judi Dench refuse to ‘lift’ their faces with no apparent detriment to their careers. At face value (pun intended), this suggests that the casting of older stars is not contingent on their adherence to practices of rejuvenation and that the majority of Hollywood’s ‘lifted’ faces are the result of choice.

However, it takes little further thought to see beyond this idea of free choice in that Streep, Keaton and Dench have earned the respect of the industry, their peers and audiences alike through their acting ability and association with challenging roles in quality dramas, rather than through their sex-appeal or looks. Such reputations renders each of them box-office gold and places them outside the pressures to rejuvenate. Effectively, unlike the majority of older female stars whose ongoing careers are secured through practices of rejuvenation,  they can remain ‘untouched’ because their acting reputations renders them ‘untouchable’ in Hollywood’s sexist/ageist hierarchy of value.

This is not suggest that older male stars do not resort to hair dyes and hair pieces, to face creams, to Botox or to plastic surgery, but for men, the value placed on these procedures is different – typically it is couched as an enhancement to a valued, distinguished maturity, rather than being the recovery of lost youth as it haunts Hollywood’s aging femininity.

The roster of female stars of all ages who endorse so-called ‘age-defying’ products by the likes of L’Oréal exposes that it is never too soon to start smoothing the wrinkles and that in Hollywood, rejuvenation is a normalised practice of femininity that has no masculine equivalent. The exposure by consumer groups on both sides of the Atlantic of Photoshop techniques employed in promotional material by companies such as L’Oréal has added a nuanced irony to the familiar chorus of ‘We’re worth it’, while also foregrounding the value and urgency of live, red-carpet events that authenticate a star’s embodiment of firm, smooth flesh on display – however achieved – and continue to validate youthful good looks as the prime goal of stardom’s aging femininity.

The Guardian – Hollywood Bias: women given less than a third of speaking parts in top films.

The Guardian – Women get less dialogue in Hollywood films the older they get, study finds

There are no upcoming events at this time.