Murray Forman on Age and Hip-Hop 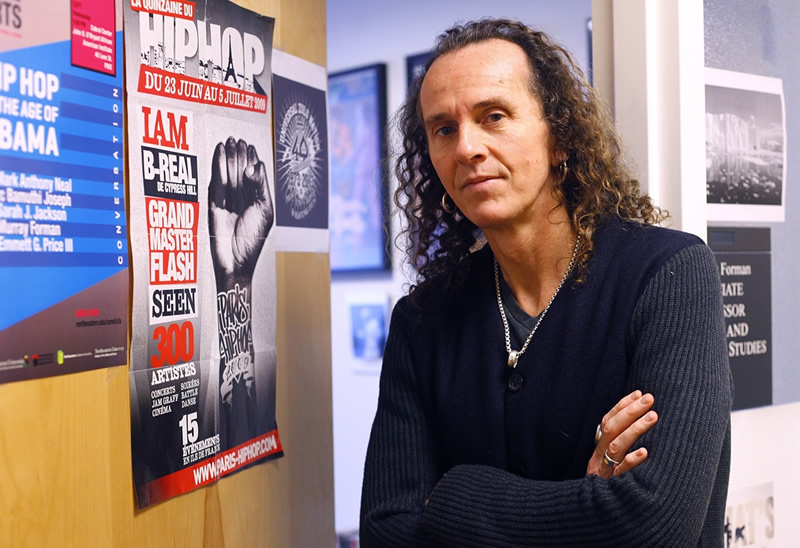 Dr. Murray Forman, co-applicant in the ACT project and Associate Professor of Media and Screen Studies at Northeastern University, has been named an Inaugural Nasir Jones Fellow by the W. E. B. Du Bois Research Institute at the Hutchins Center for African and African American Research at Harvard University. He will make use of his residency in the spring of 2015 and his upcoming sabbatical to work on his book Old in the Game: Age and Aging in Hip-Hop.

Forman is the author of The ‘Hood Comes First: Race, Space, and Place in Rap and Hip-Hop (2002) and Co-editor (with Mark Anthony Neal) of two editions of That’s the Joint!: The Hip-Hop Studies Reader (2004; 2012). In his current research and upcoming book, he turns his attention to questions of temporality and draws from critical age studies to explore the variegated ways hip-hop culture intersects with age. Hip-hop, understood as relatively new music genre that emerged some forty years ago, is now seeing some of its founding and early artists growing older. Forman explains that age is being more frequently referenced in rap lyrics, articles, and interviews pertaining to hip-hop, and that the increasing prevalence of discourses and narratives on ageing in hip-hop begs an examination.

For Forman, the uniqueness of hip-hop as a genre and as a lens to think about ageing and music lies in part in its competitive character and in the importance of battles, where age can serve as a reason to dismiss and undermine artists across the age spectrum. Hip-hop career trajectories tend to be short in comparison to other music genres: “there isn’t a Tony Bennett of hip-hop,” Forman points out. He hopes that, over the coming months, his research will help uncover why exactly this is the case. “Perhaps the hegemonic notion of youth is so strong, and the industry has not opened a space for older artists.”

Through his recent research on ageing, Forman has been reflecting on relevance as a concept through which to think about ageing in popular music, and more specifically ageing in hip-hop. Relevance prompts for him reflections on audience taste, industry practices and notions of ageing and loss. But beyond understanding the ageing process of a hip-hop artist as a story of necessary decline in relevance, he explains that through age some older artists have come to negotiate an identity of “protectors and preservers of the culture,” which in turn grants them with an accrued relevance. The artist KRS-One, for instance, can be seen as having adopted a self-appointed role policing the boundaries of hip-hop and as an arbitrator of authenticity in the genre, thereby using age, experience, and authority to fashion for himself a new place within hip-hop. This is also true for many artists who adopt terms that occur with impressive frequency in the culture, including founding father, pioneer, veteran, legend, architect, or O.G. (original gangsta).

Forman was present at the first annual ACT meeting in September 2014, where partners, co-applicants and collaborators met in Montreal. There was a particularly lively session by the emerging ACT working group on age and popular music where future collaborations and projects were discussed, along with other more general sessions that brought to the fore a diversity of methodologies, research objects and theoretical frameworks. Murray, reflecting on the meeting, says he’s “pleased that what is being introduced is often tangential to the details in my work but at the same time it can be highly relevant to my overall project”, thus prompting new questions and offering new answers.

There are no upcoming events at this time.
Line Grenier presented at CEFAN on Ageing and Singing in Public Fannie Valois-Nadeau on Digitizing and Biographizing Léo Gravelle
Scroll to top