If you google Alzheimer’s and dementia, you will find articles on “the ticking time bomb” of dementia and the socio-economic costs of Alzheimer’s. You’ll encounter videos of scientists speaking authoritatively on our inevitable cognitive decline and perhaps, most alarmingly, you’ll read messages explaining that we reach our intellectual peak at 25 years of age and it’s all just a sad descent from there.

We are writing to you in response to the consultation process for the Plan d’action municipal pour les personnes aînées 2018-2020. While we are pleased to see the city developing an action plan for bettering the lives of Montreal seniors, we want to share concerns we have about the public consultation process, and are calling on the city of Montreal and its new administration to substantially improve the process in order to make a genuine effort to engage older adults in Montreal’s Municipalités amies des aînés (MADA) strategy.

We are writing on behalf of our respective research organizations: engAGE, the Centre for Research on Aging, and the international project Ageing, Communication, Technologies (ACT), both of which are based at Concordia University. In our work, we examine questions related to later life and we do collaborative research with seniors in the Montreal community.

First, the public discussions are slated to occur in February, one of the coldest and snowiest months of the year. This is a time when we know seniors are wary of venturing out of their homes, and seniors with mobility issues will not likely attend. The seniors with whom we work have already expressed concerns that the weather and road conditions would prevent them from participating. Likewise, the locations that have been chosen for the consultations are not easily accessible for seniors who rely on public transit. Three out of four locations are next to metro stations that do not have elevators. The one location that is near an accessible metro requires an 11-minute walk to reach it. Aren’t the seniors with reduced mobility among those who are most acutely in need of an age friendly city?

Second, we are struck by the fact that the process seems to eliminate the opportunity for Montreal’s significant population of English-speaking seniors to participate. A 2006 report by the Office of the Commissioner of Official Languages explains that English-speaking seniors in Montreal are at a higher risk of isolation than those who are French-speaking. As you surely know, most immigrant seniors in Montreal have English, not French, as their first official language. Why are older anglophones and immigrants being systematically disregarded in this consultation process?

From what we found, the website outlining the consultation process is only in French, as are the survey and the guide for organizing community discussions. We must also call attention to the unfortunate fact that no consultations are happening in the west of the city, in heavily English-speaking boroughs, including in Montreal’s most populous and diverse borough CDN-NDG. We hope that English-speaking Montrealers will be included in the four consultation sessions themselves, and that translation services will be provided.

Third, the survey designed to collect the opinions of Montrealers is only available online, and we haven’t seen non-digital alternatives for filling out the survey. We know from our research that seniors are less connected to the internet than younger individuals. We also know that seniors who are already otherwise marginalized are even less digitally connected. In fact, low digital literacy correlates with low general literacy, low education levels and poverty. The city’s online poll will reach the youngest, wealthiest and most educated seniors living in Montreal, and ignore the opinions and lived experiences of the oldest citizens as well as those who are already excluded or isolated in the city. For this consultation process to be inclusive and age friendly, steps need to be taken to include the opinions of seniors who are not online.

Fourth, and finally, the city encourages Montrealers to host their own community conversations, and provides a guide to facilitate these sessions. Small-scale community conversations are a nice idea, but how can they have an impact when the city is not listening? Nowhere does the city invite or provide a way for citizens to submit the ideas, reports or recommendations that will emerge from these conversations.

If Montreal wants to call itself an age friendly city, it should begin by adopting consultation processes that are attuned to the realities of the older adults who live here. We call for the city to extend its consultation period into the spring, and to take concrete, remedial steps to address the issues we have raised above. It is time for the new Mayor and administration to show Montrealers their commitment to a brand of public consultation that is thoughtful, genuine and inclusive.

Our research groups would be pleased to meet with Montreal’s MADA team to further discuss these issues, and to work together towards building a better and inclusive process.

The research group Women, Ageing, and Media (WAM) has issued a call for the 2018 edition of the WAM Research Summer School. The School, which will be held from June 26 to 28 2018 at the University of Gloucestershire in Cheltenham, UK, will bring together academics and international postgraduate researchers across disciplines whose research engages with women and ageing. This year’s theme is performativity and age, and will feature presentations from keynotes Wendy Martin and Josephine Dolan. more information about the School is available on WAM’s website.

ACT will cover travel costs for up to $1,500 CAD for ACT-affiliated students. Make sure

Abstracts are invited for presentations around questions of performing age at the intersections of qwhere women and ageing come together with: 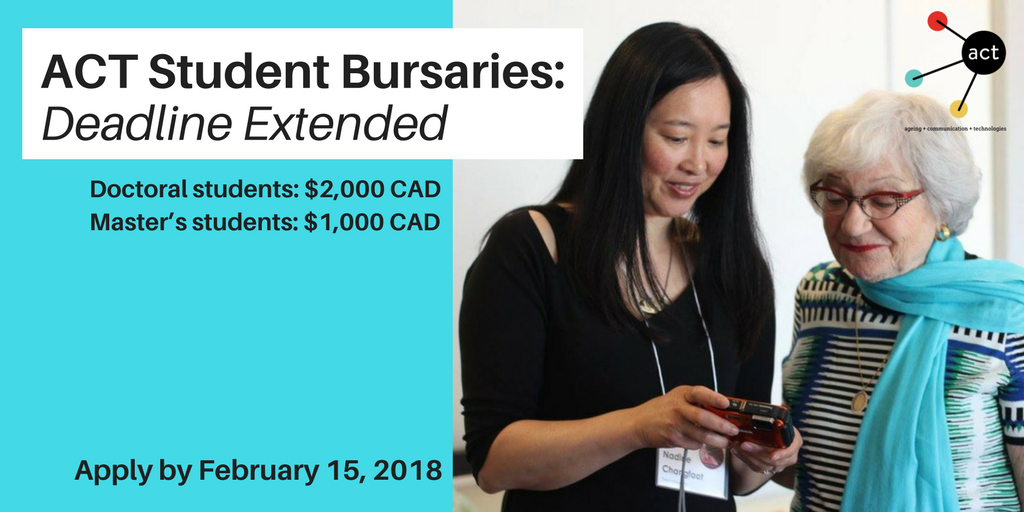 The ACT Student Bursaries are awarded to students enrolled in master’s or doctoral programs in ACT partner universities, and who are conducting research on the intersections of ageing, communication and technologies as part of their thesis project. ACT will award up to four competitive bursaries per year; two for doctoral students ($2,000 CAD each) and two for master’s students ($1,000 CAD each).

All applications must be submitted to application@actproject.ca by the required due date of February 15, 2018.

All documents must be emailed to application@actproject.ca for the appropriate due date. No late applications will be considered.

Students: Successful applicants must commit to fulfilling a number of requirements. The student will be asked to work with the ACT team to share information on the project for reporting and communication purposes. This includes providing the necessary information to set up a project page on the ACT website, a biography and photo, and other information, as requested. Furthermore, the student will be required to acknowledge the support of ACT and its funders, the Social Sciences and Humanities Research Council of Canada (SSHRC), in research outputs, including conference papers, workshops and poster presentations, publications, the final production of their thesis and any creative or media products of their research.

Applications are invited for the following postdoctoral research opportunity:

We are seeking an emerging researcher to work with us on a SSHRC-funded project on “Digital Culture and Quantified Aging”. This project is funded by a 5-year Insight Grant (2017-2022), and the research team includes Dr. Barbara L. Marshall (Trent University, Principal Investigator), Dr. Stephen Katz (Trent University, Co-investigator), Dr. Isabel Pedersen (UOIT, Co-Investigator) and Dr. Wendy Martin (Brunel University London, Collaborator). We anticipate a start date in the spring of 2018 for this one-year position (with the possibility of extension).

Catalan emotions ran high in September and October 2017. On October 1st, the population was called to an independence referendum. The pro-independence movement is a bottom-up movement that transverses across age groups. Of interest is the strong commitment of the older generations. While it might be too early for an in-depth analysis, three elements should be considered to justify this particularity. First, the willingness of the older people to get involved in the protests – a must in grassroots movements. Second, the public recognition of the role of older people now and during the dictatorship. And third, older people’s active participation in the digital spaces that articulate and support the movement.

END_OF_DOCUMENT_TOKEN_TO_BE_REPLACED 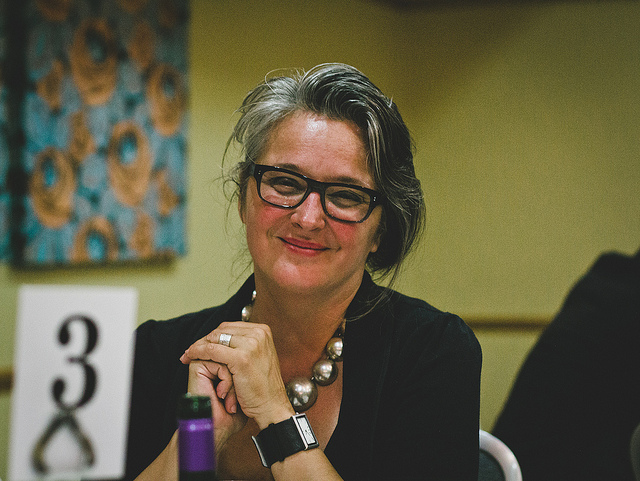 Kim Sawchuk, Principal Investigator of the ACT team,  is a Professor in the Department of Communication Studies at Concordia University, Concordia University Research Chair in Mobile Media Studies and the Associate Dean of Research and Graduate Studies- Faculty of Arts and Science. Sawchuk has been writing on age, ageing and its cultural impact since 1996. She is most well-known for her research on “seniors and cell phones” conducted with Dr Barbara Crow of York University as well her research-creation work in Critical Disability Studies. Sawchuk is a co-founder of the Mobile Media Lab (York-Concordia) located in Concordia’s Department of Communication Studies. She has just completed a six-year term as the editor of the Canadian Journal of Communications (www.cjc-online.ca) and she is the co-editor of Wi: journal of mobile media (www.wi-not.ca). In addition to her academic research, in 1996 Sawchuk co-founded of StudioXX,  a feminist research and media arts centre in Montréal.